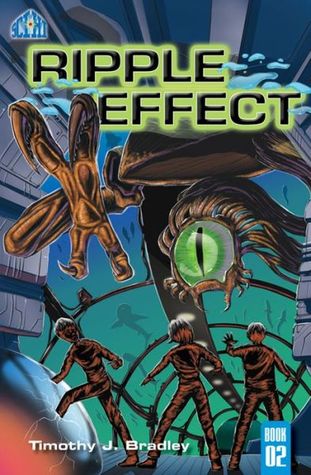 Your school days were never like this!  Science, science fiction and adventure combine in this second story from the Sci Hi series.  This time our intrepid team of students goes underwater . . .

In a near future world where technology is a bit more advanced than our own, Sidney Jamison is just your average curious kid with a penchant for taking things apart  and figuring out how they work . . . and maybe getting them back together again.  Okay, so Sidney isn’t quite so average, and neither is his school.   Fourteen year old Sid is attending the elite school for budding scientific minds, Sci Hi where he and his friends, Penny and Hari can’t seem to keep themselves out of trouble–or adventures!

The class is invited to participate in the study at WAVElab of the world’s first fusion reactor–a not to be missed opportunity!  But the class only just arrives when things take a turn for the worse.  Scientists are going missing, just suddenly gone from the underwater lab. The new fusion reactor isn’t just creating energy it’s creating strange anomalies in the time and space around the lab and something terrifying has come on board . . .  With time running out, it’s going to be up to Sid and his classmates to battle monsters, rescue the crew and explore the rips in time and space to see what lies beyond them.

Look around for middle grade books that deal with the possibilities of parallel dimension and multiverse theory in a science fiction frame work and you’ll find fairly slim pickings out there.  Ripple Effect manages to tackle the idea admirably well–and give readers a great science fiction monster to boot!  These are short and sweet stories:  clocking in at 168 pages makes this a pretty quick read and perfect for those younger or more reluctant readers who are looking for an exciting story but intimidated by too much narrative.     Swiftly turning pages full of action and characters are combined with black and white illustrations.  Some of these illustrations are full page scenes from the story, while others are diagram line-drawings that depict a tool or building.  I love some of the scene images, but I must confess to having a real love of the tech diagrams.  Most science fiction works won’t give kids a real nuts and bolts approach to the items and structures described, and the benefit of having these in the books is that it reinforces  possibility.  Rather than this stuff simply being pulled out of thin air to benefit the storytelling,  it can exist as a concrete idea of something possible to invent and construct.

For those interested, I reviewed the first book in this series, Hive Mind here.  In the review I explained why books like this are so essential to make available to young readers.  They are series books, meant to be read as an ongoing series of adventures, much like other fantasy adventure series and mystery series out there, but the key is they are not simply in a science fiction universe–the stories explore science and scientific concepts.  And how best to nurture a new generation of scientists, engineers and inventors? Well one way is to excite them about the possibilities, show them ideas of the future to make them consider that they have a stake in making it happen–to give them stories about that future–narratives that can influence their own lives and ambitions.

One of the issues in the last book was that the overall conflict seemed short-lived and readers were left wanting more.  Ripple Effect hits the readers with conflict from the very start. The prologue introduces readers to an ongoing subplot involving a nefarious organization called the Alchemists who are out to discredit and destroy scientific devices and also possibly exploit them for themselves.  Sid’s own backstory winds up being tied into the confrontation with the Alchemists, creating a much needed dimension in Sid’s  family life.    The Alchemists appear to be up to their old tricks again . . . though  their full agenda is unclear.  (I’m hoping the organization proves to be more complex than a simple black and white ani-science league–villains are always more interesting when they have some rationality to their causes.) Overall, there’s a clear effort to give this book more dimension without sacrificing the style of story being told, it’s a stronger book overall and it’s clear the author is finding his stride in the writing of the series.

Part of those 168 pages are actually devoted to a Reader’s Guide section at the back of the book.  It provides two pages of discussion questions that would be perfect prompts for using this in a classroom or in a book discussion group.    The three pages have tidbits of actual science that are used in the story–these can be researched further by those who’ve had their interest sparked.    There’s an additional challenge for readers to imagine an alternate world version of themselves and a number of other reader-related activities.  It’s great stuff, especially for the reader who might have more trouble connecting with a book easily and can use some visual and tactile prompts to help make those connections.

I hope kids will pick these up and read them, and be inspired to discover, invent and explore!

Here are a few nonfiction reads to go along with the title:

Note: A copy of this book was provided by the publisher.