Flashback Fridays: Of all the forces in the universe, the hardest to overcome is the force of habit . . .

You’re just a kid who sometimes has strange things happen to them.  But this latest bit is sort of wild–there are dead people in  the cemetery talking to you.  They aren’t creepy or dangerous, they’re just ordinary people, except, well, dead of course . . . 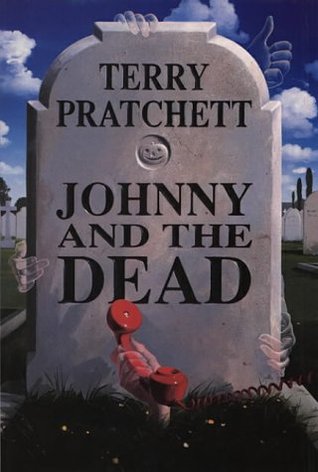 Johnny and the Dead by Terry Pratchett (Corgi Childrens, c1993)

Johnny Maxwell is an odd kid whose family is going through troubling times.  They live in a small town in the U.K. called Blackbury.  There’s a cemetery in town, an old, mostly forgotten one that Johnny likes to wander by. But suddenly he sees dead people.  And talks to them to.  The dead in this cemetery aren’t frightening or anything–they’re just ordinary people who once lived in Blackbury.   And they’re alarmed when they find out their cemetery is about to be destroyed in the name of progress and “Bright Futures.”  They want Johnny and his friends to help.

And so begins a most unusual ghost story.  Where ghosts teach the living about the power of history, memory and legacy and learn in turn that there’s more to life than death and cemeteries.  And that sometimes it’s essential to break the rules.  Sometimes habits are all that keep us pinned down.

Back in 1997 wandering around Oxford this was one of the very first Terry Pratchett books I encountered, and I still have a great deal of love and fondness for it.  Johnny is pretty much every boy.  He’s well-meaning, has some odd quirks and strange stuff happen to him, but he’s still pretty ordinary.  He’s got his friends, and a family going through troubles that he’s trying to avoid.  He’s not a chosen one or a secret heir.  He’s just Johnny.  But Johnny sees ghosts.  His friends are disappointed they aren’t spooky zombies like you’d find in the Thriller video.  But they get on board with helping him through yet another adventure. (Last time it was a video game that featured real aliens).

A lot of the residents of the cemetery are eager to talk to him and find out what’s gone on in the world since they died.  All except for Mr. Grimm who constantly warns them about breaking the rules and doing things that are improper.  Johnny slowly uncovers the history of the people buried in the cemetery–becoming more and more invested in their stories and what it means to Blackbury–the real Blackbury and not the gray town it’s becoming.  He sees the real evil in this story:

Real dark forces… aren’t dark. They’re sort of gray, like Mr. Grimm. They take all the color out of life; they take a town like Blackbury and turn it into frightened streets and plastic signs and Bright New Futures and towers where no one wants to live and no one really does live. The dead seem more alive than us. And everyone becomes gray and turns into numbers and then, somewhere, someone starts to do arithmetic…”

It’s evil in the classic Sir Terry mode.  The evil of negating humanity.   The evil of treating people as things–that’s what Johnny is fighting.  But while the kids are fighting to save the cemetery, the ghosts are realizing that the cemetery has grown too small for them.  They are curious, they are wondering and interested and excited again.  And so they finally break the rules and leave the boundaries of the cemetery.  And they discover they were never meant to stay at all–that there is a beyond to explore and travel and continue in–and only fear and habit was holding them back.  It’s something that reminds that every life has meaning, and that the past still matters,  so long as it informs us in the present.

If you’ve never heard of Sir Terry Pratchett, I can only say I hope you will discover him.  He is by far and away one of my favorite writers and has many titles for readers to discover.  Some for children, and many more for adults.  His quirky humor and dry observations are ultimately balanced by a sense of heart, profundity and poignancy that can turn a funny book into one that makes you tear up and cry–or realize why you’re alive.