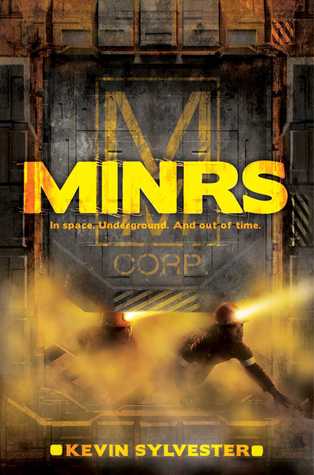 Christopher Nichols lives on Persus, the newest planetoid in the solar system, and a place rich with the mineral and metal resources that Earth so desperately needs.  But just when the Earth and Persus go on a communications blackout for two months, disaster strikes!  Persus is attacked, and Christopher barely escapes the barrage of bombs.  Together with a ragged band of surviving kids, they must find a way to survive, hide, and strike back at their attackers.  But in the midst of this disaster, Christopher will have to question everything he thinks he knows about the Mining company his parents worked for–and what being a leader really means.

Kevin Sylvester delivers an intense, action-packed middle grade science fiction novel that does not disappoint.  A great blend of future-tech and simple survival against a superior enemy, it’s rare to find something like this that doesn’t cross the line into YA territory.  Truth be told, this book doesn’t pull punches–people die, others are disfigured or traumatized.  It creates the ongoing feeling that none of what actually takes place is fun or glorious or “adventure” in the “golly gee” variety.  Readers will feel the real danger and threat that these kids are facing, and the struggles that Christopher has trying to get them to work together, how he is conflicted by his best friend’s insistence that they strike back against the enemy and make coldly logical sacrifices to have their victory.  It’s brutal at times–but I think what keeps it middle grade is that you are continuously reminded that these characters are just kids.  Christopher struggles with what it means to be a leader while trying to swallow the huge loss of his parents.  Same with the other kids who respond in a variety of ways to the trauma.  While the awfulness is convincing, you see kids handling it–as kids.  They’re fighting back and surviving, but they still stumble, they still falter and yearn for their parents or the world before the attack.  The author manages to maintain the humanity of our characters throughout their struggle,  and keeps readers tied in with characters they’ll be able to identify with.

Christopher Nichols has no idea how sheltered a life he’s led in his life on Persus.  He’s convinced of the great purpose of their mission on the planetoid and pleased his parents are contributing to that future.  His cares and concerns are pretty much those of any kid growing up despite his science fictional home.  His transformation is not an easy one, but it is central to the story.  The blinders are torn off rather abruptly for Chris.   Not only is his home not as safe as he imagined, but neither is the work his parents were doing quite as wonderful and heroic. And yet he’s the kid who is ready to take the next step and plan when the others are still trying to cope.  His best friend, Elena Rosales comes through the struggles with a conviction of what a leader should be and do–and Chris finds himself struggling with Elena’s vision and interpretations of what they should do.  Neither of them is a simple character stereotype.   The author gives readers a fairly diverse cast of kids to work with . . .  while I can’t be sure that Chris is black (other that tight curls, there’s no real description of him that I can find and the cover image is too murky to be sure), Elena is clearly Hispanic.   It’s clear that the rest of the kids are a pretty varied group as well.  There’s no sense of token diversity here.  In fact, given the actual reality of the planetoid mining operation, it makes sense.

If there’s one area I have some critique, its in the nuts and bolts of the actual science fiction of the planetoid.  There’s little explanation of how Persus has been made livable (it appears to have an atmosphere?)   And while one would expect that gravity would be markedly different from that of Earth, we really don’t see that exhibited.  If we’re going to argue on extremely accurate science fictional settings here, Persus may not be exactly up to code.  I would have liked to see more of how the different environment of Persus would affect the human body and living conditions there, but it’s a smaller quibble in the face of what I find to be some excellent storytelling– I’m willing to suspend my disbelief.  I’d love to see more time spent on the “science” aspect of this setting in the future.

Confession time.  I’ve been reading science fiction, and particularly children’s science fiction for most of my life now.  It takes a heck of a lot to impress me.   The solid writing, engaging plot and accessible characters managed that. It takes even more to surprise me.  While not every aspect of this story is new or completely unpredictable, it refuses to be lazy by embracing the typical tropes.  And the story managed to surprise the hell out of me in a particularly spectacular fashion.  (Just ask the poor woman on the subway next to me–I got a little exclamatory).

Is this a book for everyone? Absolutely not.   But for those writers who enjoy survivor fiction, military science fiction, gritty adventure plots and powerful characters caught up in dangerous situations, I think this is a great addition to reading lists.  And dollars to donuts those who enjoy this book will be clamoring for the next one!

Note: An advanced reader copy was provided by the publisher.

Recommended for grades 5 and up.