It’s been a while since I’ve done an art exploration.   This originally was going to be the next installment of my unfortunate cover art  posts, but I found so many interesting covers for this particular title, I decided to feature just the one title.

A Tale of Time City by Diana Wynne Jones was first published in 1987 by Greenwillow books.  It’s a wild time travel adventure that’s pure Diana Wynne Jones, and one of my favorite of her books to read just for absolute fun. 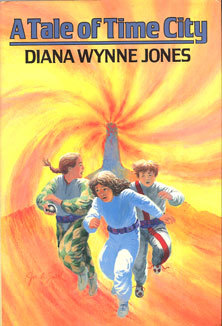 This seems to be the original cover–and it is the one I remember from the library edition I first read.  This captures the feel of the characters in their pajama like suits with the belts, the time traveling device in Jonathan’s hand.  It captures Jonathan’s ponytail as well–an important aspect of this character. Personally I think it captures the tone of this middle grade adventure perfectly.  Bright colors, action shot, but with younger characters and a “lighter” feel.   I like that it tries to capture the look of the characters with some accuracy. 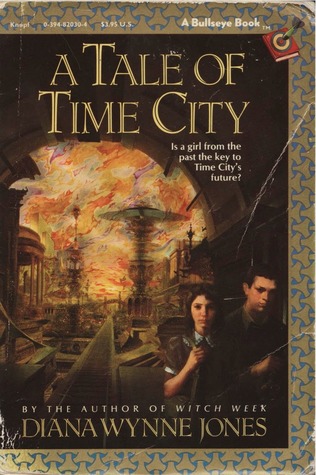 This is a paperback version that appears to have come out around the same time frame.  I think this is the copy I have–it went with the rest of the author’s works pubbed in paperback in the U.S. around that time.  All had a similar decorative border and look to them.  Honestly the brown and blurry sense of this does not make it very compelling. Vivian is  hardly visible and Jonathan is just in the shot, but his ponytail isn’t apparent.  It’s  not the best of the covers and I’ve got to say I picked this one up because I’d already read it and wanted to own the book. 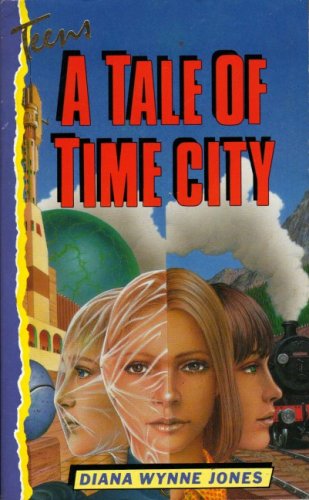 I think this cover is from the 1990s–the art is reminiscent of a a few other covers at that time, but overall I’m not a fan of this one.  Vivian doesn’t look very much like the young girl she’s supposed to be and Johnathan ‘s signature ponytail is not in the shot.  The covering the characters are wearing in half the shot is rather disturbing and the backgrounds are bland.  I don’t think this cover really captures the spirit of the book, even though it does refer to scenes within the story and indicates the idea of time travel. 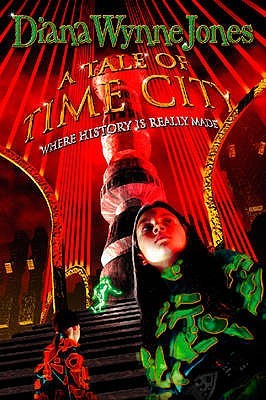 Not certain on when this cover is from but it offers some nice elements.  Here we get to see the pajama like Time City clothing with full glow on projected designs.  We see Vivian up close looking more like a contemporary kid.  I would comment that Jonathan’s ponytail doesn’t seem long enough that he could chew on the ends, but at least it’s there.  This cover emphasizes the action adventure aspects, as this scene is one of the critical end of the story confrontations.  It’s an interesting cover and not bad overall, but the angle feels odd. 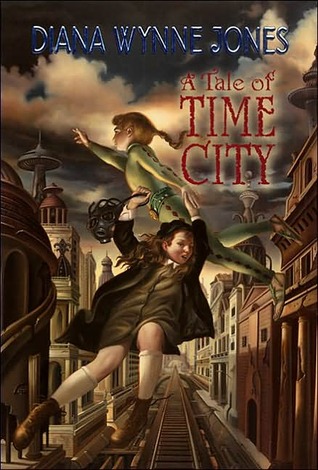 This title is from Greenwillow in 2002 and can still be found on library shelves.  It’s the cover that makes me wonder what the heck the art direction was thinking.  First off, it’s brown brown brown.  Brown does not an action adventure tone make.  Second, Vivian looks like some weird renaissance stature in WWII era clothes rather than a real person.  Third yes, Jonathan’s in the shot with his ponytail/braid, but I don’t remember him being a blond.  I also don’t remember him flying. Johnathan looks like some angelic Peter Pan dragging a very ungainly Wendy up into the sky. 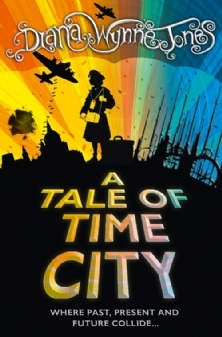 This is from HarperCollins in 2010–I believe it is a British edition as I haven’t seen it in the states.  I actually like this one quite a bit for pure whimsy and color.  It manages to capture the sense of time travel , the main character caught amid all the chaos and a sense of amazing adventure.  A nicely done silhouette approach. 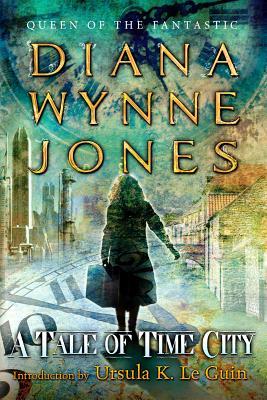 The 2012 Firebird cover.  Of course the introduction from Ursula K. Le Guin has me aiming to pick this one up when I can, but it’s also a fairly attractive cover that captures the main character facing away from us and looking at a blur of different times and scenes with a huge clock shadowed in the picture.  While it doesn’t necessarily convey the delightfully madcap adventure of our characters, it’s a well done cover that I think will draw readers in out of curiosity and interest in a time travel story.

Truth be told, my favorite cover is still the first . . .I may have to dig up a copy of that one for my own collection if I can find one.

Which cover do you prefer?  Comments welcome!